Ptuj is one of the oldest cities in Slovenia and a city with a very rich history. It is the economic and cultural center of Lower Podravje region and the traffic junction of roads from Maribor to Gruškovje and Zagreb and the roads from Slovenian Bistrica to Ormož and Središče ob Dravi to Croatia.

In Ptuj you can see the castle, Dominican and Franciscan monastery and many galleries and Ptuj Lake, largest permanent lake in the Slovenia. Panoramic boat Čigra offers a beautiful view of the old city Ptuj and the nearby hills called Slovenske gorice and Haloze. Ptuj Lake is a nice place for walking, relaxing and numerous aquatic and riparian sports. Local people are sometimes using a word Ptuj Sea for their lake.

For active leisure, health and relaxation you can visit one of the youngest and most modern Slovenian thermal spa centers. Spa Terme Ptuj is offering a stay in a hotel, apartments, bungalows or a campsite. Guests can enjoy in twelve swimming pools, a lazy river and water slides and also the largest water slide in Slovenia .

In the immediate vicinity of Spa Terme Ptuj one can find more than 50 hectares big golf course with 18 holes. 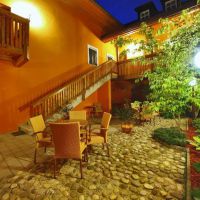 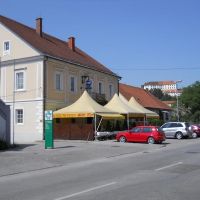 Rooms Ptuj 650 for a total of 24 people are available in Ptuj in the well-known inn. Rooms are suitable for short vacation or for business. 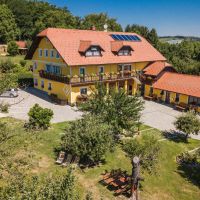 Rooms and apartments Ptuj 557 are located in Ptuj on a small hill and are surrounded by vineyards.